Stephon Clark demonstrators blocked thousands of fans from a Sacramento Kings game for the second time in a week on Tuesday night.

Activists also disrupted a community forum at City Hall, where heated discussion of the police shooting grew out of hand, prompting the mayor to end the meeting due to concerns over safety.

At the Golden 1 Center, a group of approximately 200 protesters stood in front of the doors to the Kings arena. The team then shut down all entrances, leaving fans frustrated and puzzled for the second time in six days.

After a while, Stephon Clark’s cousin Andre Young urged activists to let fans in to the arena. He was able to persuade several to make way for the fans to enter, but many more remained to block the doors.

The game started after a brief delay, and the Kings issued a statement that they hoped to get the fans inside. But ultimately they remained closed, and people were told to go home, and that they would receive information about refunds.

At City Hall, calm was short-lived at a forum that drew several hundred community members to discuss the shooting.

Ste'Vante Clark — Stephon Clark's brother — interrupted a council member minutes into the meeting and jumped onto the dais, where he sat next to the mayor and chanted his brother’s name.

After dancing in front of the council and inviting fellow protesters to join him, Ste’vante Clark exhorted the crowd to honor his brother in an emotional, profanity-laden rant.

“If you ain’t black, you’re white, you hear me?” he said while taking over the microphone. “Because all my people are sons of slaves.”

Steinberg initially indulged Ste'Vante Clark’s protest. But when he stood atop a table and held his hands in the air, the mayor banged the gavel and called for a recess.

It wouldn’t be the last.

The forum resumed after a 15-minute break and Ste'vante Clark left City Hall without incident. But after several hours of public testimony, the crowd grew angry and restless.

By 8:30 p.m., many rose from their seats to witness an officer hitting protesters with a baton outside, then approached the dais while chanting “You can't stop the revolution.”

After a second recess, the mayor ended the forum. "It's my job first and foremost to be able to guarantee the safety of everybody here in the plaza," he said, "and I"m not sure we can do that."

Zaide Davis says he was banging on window at City Hall when police told he and his cousin to stop. He says they yelled an expletive at the officers. “And they threw him to the floor and put him in handcuffs,” Davis said of his cousin. “And then they started batoning people — I got hit in the baton with a leg — and they Tased my friend.”

A spokesperson with the Sacramento Police Department says one individual was arrested for assaulting an officer and being drunk in public outside City Hall. 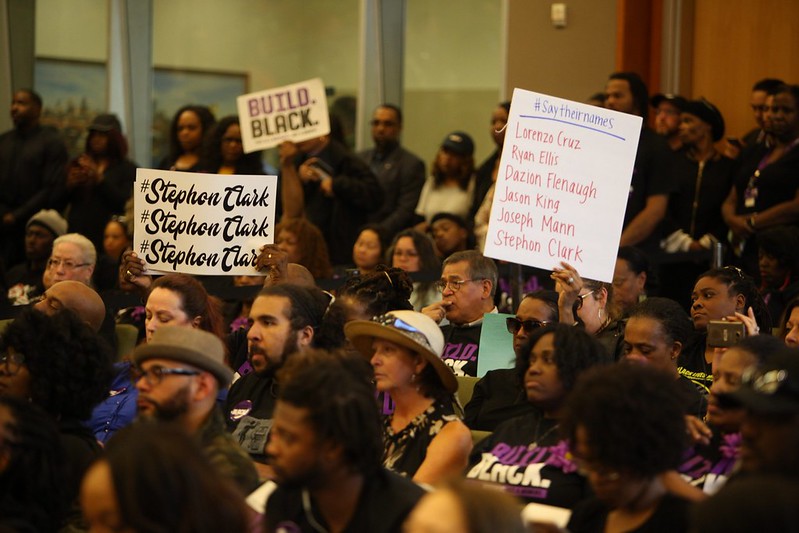 Gayle Guest Brown spoke to the council about very specific concerns. “What are we doing to test our police officers on this issue of implicit bias?” she asked, adding that cops’ “fear of black men and black women is real."

Sierra Health Foundation executive director Chet Hewitt, spoke about talking about Stephon Clark with his sons. “I've struggled over the past eight days trying to help them deal with what they saw on that video,” he told council. “Trying to help them believe that I live in a community that holds their life sacred.”

Speaker Alder Doliver yelled at the council. “I’m sick and tired of you guys sitting up here talking about how they [officers] need some training!” he shouted. “They don’t need any training. You need to make them accountable for what they do!”

Rachel Francois said that she lives in fear “knowing that the next unarmed black man or female in the headlines could be my dad, my uncle, my cousin or even myself,” she said.

Attendees began arriving more than an hour before the forum’s 5 p.m. start to secure a seat, and it reached capacity quickly. The city installed several metal detectors and security checkpoints in the plaza outside of City Hall, where hundreds more waited to enter. But at one point during the meeting, protesters rushed the security check-ins and flooded the lobby, where they chanted and shouted.

City council decided to hold the forum last week after consecutive days of protest over the shooting of Clark on March 18. Police shot at Clark 20 times after responding to complaints of an individual breaking car windows. He died at the scene. Officers who shot him say they thought he had a gun, but only found a cell phone.

Out front of City Hall before the meeting, activists handed out shirts and buttons that read “Build Black. This is a movement. Not a moment.” Last week, Steinberg told Capital Public Radio that the response to the shooting was “a moment,” and that “it’s up to us to choose what to do with that moment.”

Earlier in the afternoon, protesters chanted and gave speeches in front of Sacramento County District Attorney offices. They’re demanding that the DA Anne Marie Schubert’s file murder charges against the officers who killed Clark in his grandparents’ Meadowview backyard.

State Attorney General Xavier Becerra announced on Tuesday that the Department of Justice would provide independent oversight of the shooting investigation. His department will also review city police procedures.

City Council intended to reconvene the meeting on Wednesday at 1 p.m., but postponed it after learning that Stephon Clark’s wake was scheduled at the same time.

“These are some tough time here in Sacramento,” the mayor said in a video statement after the forum, “we will get through this if we stick together, and if we recognize hearing the pain and anguish is essential.”

A previous version of this story used the word “rowdy” to describe the unrest at City Hall. After discussion based on community feedback, we have changed the headline.