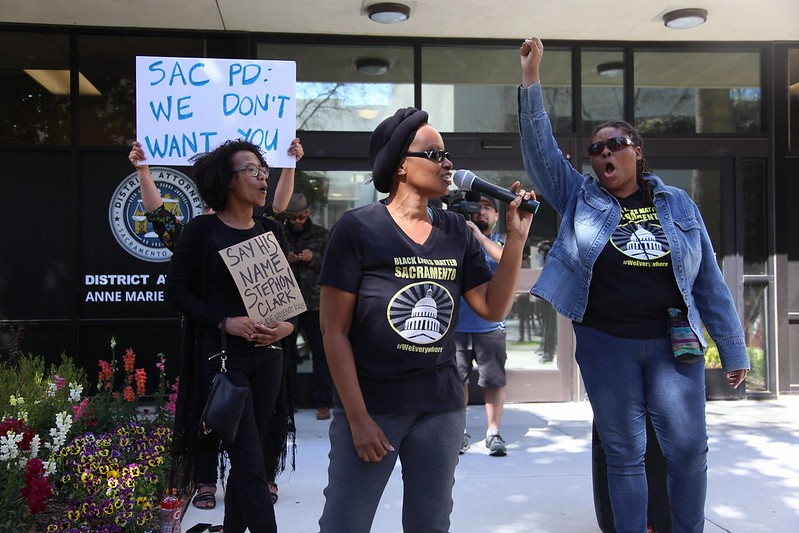 Demonstrations against the police shooting of Stephon Clark returned to the streets of downtown Sacramento on Tuesday.

Activists with the local Black Lives Matter chapter showed up out front of the Sacramento County District Attorney’s Office to lobby the region’s top prosecutor to file charges against the officers who killed Clark.

Protester Bry’Anna Hall is 14 years old and from Meadowview, the community where Clark was shot in south Sacramento. “I grew up here and I’m used to hearing shots at night. I’m here to stand up for my people,” she said.

A sign taped to the DA office’s entrance read “office temporarily closed.” People outside the office told Capital Public Radio that employees left around 2 p.m., about an hour before the protest was scheduled to begin.

First day of three protests at the Sacramento County District Attorneys office. Looks like they’re not gonna let people in. People outside say they closed the office around 2 pm. and workers filed out. @CapRadioNews pic.twitter.com/6iC7Sg7lHp

“I don’t think they’ll let us in. I think she [the District Attorney] is a coward. We need the police officers who shot Stephon Clark charged and convicted.” - @tanyafaison with Sacramento #Blacklivesmatter @CapRadioNews pic.twitter.com/z3q09h4Fci

Tanya Faison, founder of the local Black Lives Matter chapter and an organizer of the protest, called the DA a coward. “We need the police officers who shot Stephon Clark charged and convicted,” she said.

In a statement, DA Anne Marie Schubert said “we respect people’s First Amendment rights and are prepared for the protests.”

Clark was shot on the night of March 18 in South Sacramento. Police had responded to complaints of an individual breaking car windows in the neighborhood. A sheriff’s deputy in a helicopter also witnessed in individual reportedly breaking a glass sliding door. Two police officers saw Clark, pursued him, and shot at him 20 times in his grandparents’ backyard. He died on the scene. Officers say they thought he had a gun in his left hand, but only found a cell phone.

Protests are expected to continue through the afternoon and during an community forum at City Hall this evening.

Stephon Clark’s cousin Andre Young said unrest will continue if there is no justice for the family. “If they don’t convict the two police officers, there will be a riot,” he said. “I don’t want there to be a riot, but if we have to do one to send a message, then that shows what leaders are doing to us.”

At the press conference, Schubert said she welcomed the DOJ’s oversight in the investigation. “While we both agree our job is to follow the facts and the law, we also want the community to trust the process and ultimately the outcome,” she said.