The Takeaway is a one-hour daily news show that reveals unexpected insights into the day’s news, fills a need for greater context, and interacts with audiences in a way that no other public radio news program offers.

The Takeaway convenes conversations across social divides to give listeners not just the information, but the complex, nuanced perspectives they need for understanding and participation. It features voices of Americans from all walks of life who may have different struggles and challenges but often speak to the same desires, dreams and hopes for the future of their families and communities. It does not shy away from big and complicated stories; through exceptional sound design and production, the show breaks down complex policy and connects listeners with stories that touch their lives and their experiences.

The Takeaway is a co-production of PRX and WNYC, in collaboration with WGBH Radio Boston.

The Past, Present and Future Of The Biden Administration 2022-01-21

The Past, Present and Future Of The Biden Administration

This week, the filibuster and voting rights act fell through in the Senate, and student debt forgiveness, criminal justice and climate change reforms hang in the balance. These failures have had an impact on voters across the country, according to recent polling. So what does that mean for the future of the Biden administration? For the discussion we're joined by Joel Payne, Democratic strategist, host of the podcast, Here Comes the Payne, and CBS News political contributor.

A new law allowing roughly 800,000 noncitizens to vote in local elections went into effect in New York City. Some Democrats and immigration advocates don't see it as a win. Russell Berman, staff writer for The Atlantic, joined to discuss his recent reporting on the law and what it means for the Democrats nationally.

We spoke with Professor Kimberly Marten about why Russia has chosen this moment to take more aggressive action towards Ukraine, and whether the U.S. and other Western powers have any other options to prevent a military conflict.

How Should the Media Be Covering Democracy At Risk?

The Takeaway spoke to Margaret Sullivan, media columnist at the Washington Post, and Lewis Raven Wallace, author of The View from Somewhere and the host of the podcast of the same name.

How Antitrust Laws Are Defining the Facebook Monopolization Case:

We get the latest on Facebook/Meta antitrust lawsuit, and learn more about what constitutes antitrust with Vanderbilt law professor Rebecca Allensworth.

A Year and a Half After McGirt v. Oklahoma, State Officials Still Want Ruling Overturned:
State officials have filed 45 petitions with the Supreme Court asking the justices to either overturn or rule more narrowly on McGirt. This month, the Court has been considering some of those petitions. The Takeaway speaks with Allison Herrera, Indigenous Affairs reporter for KOSU, about the most recent developments.
A Word about Wordle:
We speak with Associate Professor of Social Psychology at the University of Florida, Matt Baldwin, about why playing Wordle and sharing our results with friends and family is so rewarding.
How to Reimagine Judging:
Judge Nancy Gertner, argues that judges must be actively involved in revolutionizing the justice system. She also offers up six key recommendations for reimagining judging, including improvements to judicial selection and community engagement.
For transcripts, see individual segment pages.
Listen
/
download audio
Update RequiredTo play audio, update browser or Flash plugin.

Dr. Anthony Fauci on How to Make Sense of Omicron

Dr. Anthony Fauci joins The Takeaway to give his take on omicron, vaccinations and testing, and answer questions from listeners.

Why the Biden Administration Is Getting Low Marks On Handling COVID

How Do We Achieve Vaccine Equity?

When we look at education, access, and messaging, we begin to understand the barriers to vaccination.

Dads Can Experience Mental Health Issues After Childbirth, Too

The Takeaway talked to Aymann Ismail, a staff writer at Slate, about his recent experience with his newborn baby.

The Filibuster: An Obstruction or Preservation of Democracy? 2022-01-18

The Filibuster: An Obstruction or Preservation of Democracy?

The Takeaway looks at filibuster reform and how it impacts our democracy.

What Exactly is An Accident?

There are racial and economic disparities when it comes to who dies and who lives in a so-called accident.

The Spirituality of Toni Morrison

The Takeaway speaks with writer and journalist Nadra Nittle about her book Toni Morrison’s Spiritual Vision, which explores Morrison’s Catholicism and spirituality.

In some ways it is impossible to fully celebrate MLK Day in a virtual environment, after all, the movement for racial justice and Civil Rights  has always been about coming together. However, the decision to go digital does honor another aspect of the movement- its creativity and collective action.

Hosted by various WNYC radio hosts, this commemorative and uplifting special brings together scholars, cultural and community leaders, and activists to engage in conversations and performance, exploring the many ways the arts influenced the creative nonviolent resistance of Dr. King's activism and how his work is continued today.

You'll be hearing excerpts from the Uptown Hall: MLK- Activism And The Arts, our live celebration of the life and work of Dr. Martin Luther King Jr. recorded on Apollo Digital Stage. Brian Lehrer sat down with award winning children’s book author Jacqueline Woodson; Kai Wright spoke with Rashaad Robinson from Color of Change; and WNYC’s Jami Floyd, spoke with Garrett McQueen, executive producer and co-host of the Trilluqoy podcast and president of trill werks media. WNYC’s host of “all of it”, Alison Stewart was joined by stage and film actress, writer and director, Trezana Beverly and Jonathan McCrory, the artistic director of the National Black Theater.

The Takeaway host Melissa Harris-Perry spoke with artist, collector, CEO and founder Of Black Art In America, Najee Dorsey and former executive director of the Southern Christian Leadership Conference, mayor of Atlanta, member of Congress, and US Ambassador to the United Nations, Andrew Young. 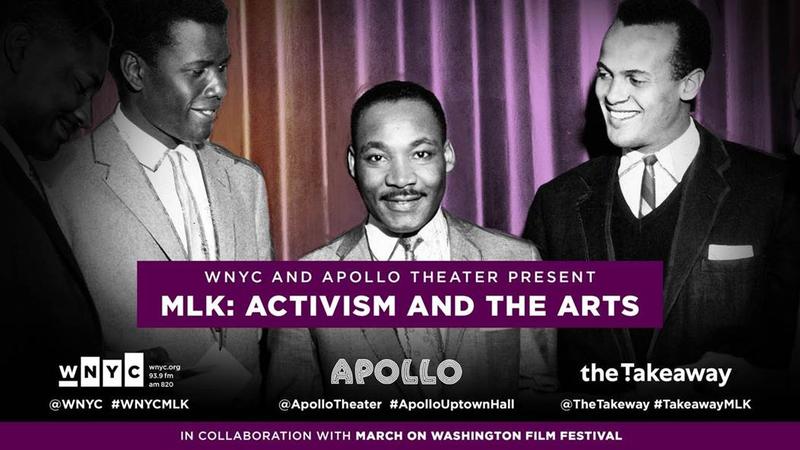 This week marked 20 years since the opening of Guantanamo Bay Detention Camp, a military detention facility that has been controversial since its inception. We took the entire hour to understand what has happened there and why it matters.

Mansoor Adayfi, former Detainee at Guantanamo Bay and author of the book “Don’t Forget Us Here: Lost and Found at Guantanamo”

The Takeaway spoke with Emma Court, health reporter at Bloomberg News about this new class of weight loss drugs. And maybe you’ve noticed there is more than a little fat-shaming going on around Covid-19, obesity, and mortality. We also spoke about this with Paula Atkinson, a body liberation psychotherapist and professor at George Washington University, where she teach a course about body justice called Weight and Society.

Why Some Star Athletes Refuse The Vaccine And Get Away With It:

We speak with sportswriter Kavitha Davidson about why this mentality from these players matters in the sports world and beyond.

Navarro is Back on the Mat for Season 2 of Cheer:

We speak with the director and executive producer of Cheer, Greg Whiteley, about what to expect this season and why the docuseries has us all cheering for the cheerlebrities of Navarro.

Across the Country, Substitute Teachers Are In Demand

Giulia Heyward, reporter at the New York Times, joins The Takeaway to discuss the staffing shortage, what it’s meant for substitute teachers, and more.

The Dangers of Restricting Teachers From Teaching:

Last week, during an Indiana state senate committee hearing on an education bill, state senator Scott Baldwin argued that educators “need to be impartial” when teaching about Marxism, Nazism, and fascism. We spoke with Pedro A. Noguera, Dean of the Rossier School of Education at the University of Southern California, about the dangers of placing these limits on educators, and hear from Indiana teacher Matt Bockenfeld, whose comments sparked Senator Baldwin’s controversial remarks.

Rep. Adam Schiff on the January 6th Committee and Restoring Trust After Trump 2022-01-11

Rep. Adam Schiff on the January 6th Committee and Restoring Trust After Trump:

The Takeaway speaks with Representative Adam Schiff, chairman of the House Intelligence Committee and one of the members of the House committee investigating the insurrection, about the work of the January 6th committee and some of the other central issues facing Congress and the Democrats today.

Actress, author and “gangsta mom of four” Holly Robinson Peete joins us to talk about her advocacy work for kids on the autism spectrum and her decision to go public about her son’s diagnosis.

How Researchers Are Using Stem Cells To Learn More About A Rare Form of Autism:

We spoke with Dr. Joseph Dougherty,  professor of genetics and psychiatry at Washington University in St Louis about the research that he and his team are conducting.

Disagreements Between Chicago Public Schools and the Chicago Teachers Union Result in Closures:

The Takeaway speaks with Nader Issa, reporter covering education for the Chicago Sun-Times, about the recent disagreements with the Chicago Teachers Union and the Chicago Public School district, and we hear from teachers and parents.

We were joined by Jake Offenhartz, WNYC and Gothamist Reporter to discuss the apartment building fire.

Sidney Poitier and Professor Lani Guinier Pass Away at Ages 94 and 71:

Our host reflects on the legacy of these two figures.

Do We Understand The Full Breadth of Dr. Martin Luther King Jr.'s Message?:

Scott Roberts, senior Director of Criminal Justice Campaigns for Color of Change and Patrisse Cullors, New York Times bestselling author, educator, artist and abolitionist joined us to discuss the complicated legacy of Dr. Martin Luter King Jr. and how there’s still so much work to be done to realize his dream in full.